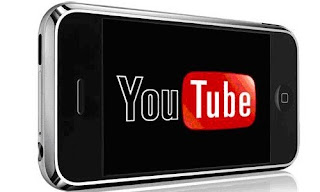 YouTube has announced a 6-second ad unit the user can't skip, termed "Bumper ads", and specifically designed for mobile. The new six-second video format is sold through the Google AdWords auction on a CPM basis, which according to Google, is ideal for driving incremental reach and frequency, especially on mobile, where “snackable videos” perform well.

While, brands are already heaping praises on Bumper ads, as working well for serialized ads — short bursts of videos.

A recent research shows mobile retention of users' is much lower, and getting a message across in fewer seconds is often more powerful than trying to build a load of context, even as half of 18-49 year old turn to mobile device first to watch video.

YouTube, however, quipped that Bumper ads could work better if combined with other YouTube ads running simultaneously.

Bumper ads may invariably mean more metrics such as completion rates with view-length coming from video platforms to measure the effectiveness.

Early tests on Bumpers resulted a strong lift in upper funnel metrics like recall, awareness and consideration. Also, it works well to drive incremental reach and frequency when paired with a TrueView campaign.

Bumpers is expected to launch in May, coupled with the rolling out of new ad formats that are uniquely adapted to the way people watch video now, and in the future. 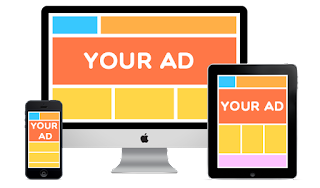 Pop ads originated as far back as late 90s, with Ethan Zuckerman claiming that he wrote the code to launch advertisements in separate windows as a response to complaints about displaced banner ads.

Albeit, perhaps the most insidious of these new ad types, Pop ads remains the Sheriff of the modern Internet advertising world – annoying but pretty useful.

Stats from Internet research firm NetRatings, claims that pop ups accounted for just 2% of online advertising in the first half of 2002. Whereas, that 2% added up to 11.3 billion pop up ads delivered.

Admittedly, unscientific poll of over 80% of Internet users hate pop ups because they are distracting and may clutter up the display.

But, the truth is that pop ups work. And like inserts in the newspaper, pop ups are freestanding ads, meaning you'd probably glance at them even before closing the window. Hence, the companies that buy pop ups love them.

Some instances of Pop Ads Success

Orbitz, online travel service, essentially built their brand from scratch with pop ups and who can forget given that they ran about 687 million of them in the first half of 2002.

In the same vein, the pervasive X10 spy camera ads that launched the pop up revolution? Nothing like a pop up to make you feel simultaneously annoyed and thrilled.

What's the future of Pop Ads?

From an advertiser standpoint, the visibility advantages of pop up advertising clearly outweighs the consumer backlash. Orbitz tries to blunt the “I hate pop ups” mindset by creating clever, interactive pop ups using Flash, but now can be effectively done using HTML5.

If you’re looking to online advertising and want to go “beyond the banner,” the pop up is a great option.

As for the consumer, you’d probably be stuck with it for at least the foreseeable future, as long as pop-ups remain effective.

How Publisher can benefit from Pop ads

If you're a web publisher looking for comparatively easy way to make money outside the old monetization systems, then you'd want to consider a reliable Pop ads service like Shorte.st.

In conclusion, every good ads work, regardless of platform, something that most pop up advertisers are yet to realize. But, the real smart deal is to buy some traditional banners as a baseline, as well as pop ups and rich media ads. 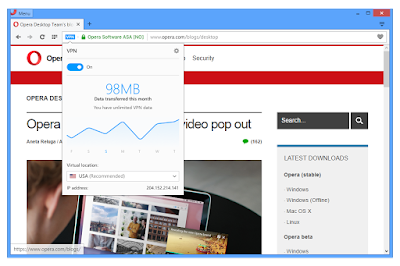 Opera has claimed the first major browser maker to integrate an unlimited and free VPN (Virtual Private Network) directly on the browser, meaning its users don’t have to download VPN extensions or pay for VPN subscriptions to access blocked websites or shield their browsing on public WiFi anymore.

While, VPNs are prized for their enhanced privacy, and handling restricted online contents, as well as countering cyber-attacks.

Opera desktop browser, Opera 38 developer, is the latest edition of the web browser to feature a free in-built VPN service so as to ensure internet and information security.

Unlike most VPN and proxy servers which have been limited and based on a paid subscription, Opera's built-in VPN offers a free, unlimited, native VPN that just works out-of-the-box and doesn’t require any subscription, making VPNs available to everyone.

According to Krystian Kolondra, Opera’s engineering chief, "By adding a free, unlimited VPN directly into the browser, no additional downloads or extensions from an unknown third-party provider are necessary".

Opera’s built-in free VPN is pretty easy to use, Mac users just need to click the Opera menu, select “Preferences” and toggle VPN on, while Windows and Linux users need to go to the “Privacy and Security” section in “Settings” and enable VPN to activate.

Opera Gets a free, unlimited VPN directly on Browser 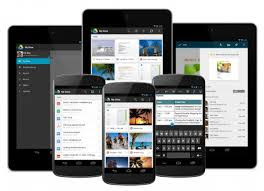 Google Drive has added a checkbox, which now makes it possible to pick which folders on the cloud-based file sharing system are synchronized to your Mac or Windows PC. The checkbox opens up the ability for easier storage and file sharing on the cloud, and with improvement on the file-sharing service, it unlocks more uses for Google Photos.

While, storage on Google Drive isn't a problem in itself, photos and videos, which are automatically backed up from mobile devices, have come to present some difficulties owing to excessive accumulation over the years.

And most users have thereby resorted to occasional deletion of photos and videos to make room on their gadgets, but now, the new Google Drive option makes it possible to choose which folders to sync with your PC.

Google Photos has got lots of interesting features, like sorting photos by person, identifying landmarks and locations, which have now been enhanced by Google's artificial intelligence.

Cloud computing, on the other hand, is perceived as a way to protect data and to share it more securely between phones, tablets and PCs.

Google Drive's new option to preserve and share photos and selected favorites from mobile devices, accessed by selecting "preferences", open the "sync options" tab, and check the folders to sync, is indeed worthwhile.

Google Drive: How Google made storage and file sharing more useful on the Cloud

Microsoft has launched CaptionBot.ai, an AI experiment which is able to analyze photos in seconds and give accurate description of any particular picture. While the company's push with artificial intelligence research is ongoing, with Tay still enmeshed in controversial Twitter updates.

The new AI experiment, CaptionBot, is self-described as able understand the content of any image and to give accurate description as well as any human.

CaptionBot can't seem to do its job pretty well at the moment and admittedly, it concedes still learning so will hold onto your photo, though no personal information is involved.

CaptionBot utilizes Computer Vision API to identify the components of the photo, and with data from the Bing Image API, it runs through Emotion API to spot the image description.

Albeit, it is able to recognise “a broad range of visual concepts” and also perform entity extraction so that it can recognize celebrities, a whole lots of work is needed to get it perfected.

Safety Tips is a new security functionality in Office 365, which automatically provides an additional layer of protection for all its users. It's new set of tool in combating phishing scams and online fraud, whether you’re working within Outlook for the Web (not to be confused with Outlook.com, but the browser-based version of Outlook for Office 365) or in the Outlook app.

It will be managed by Exchange Online Protection, the back-end protection mechanism used to secure email sent via Office 365 according to Microsoft.

The “Safety Tips” tab will be added at the top of every email in the coming weeks: colored bars to let you know whether an email is safe, suspicious, or known to be fraudulent.

Albeit, Safety Tips won’t be able to block every risks, but it’s an additional layer of security that will make a hacker’s job a bit harder.

Microsoft will classify email into four different categories; with all four types of messages flagged within the web version of Outlook, but only suspicious emails will be highlighted within the Outlook app.

Any email that has failed sender authentication or is a known phishing email is labelled suspicious email and flagged with a red bar.

While, unknown messages will be flagged as yellow, and Exchange Online Protection will mark it as spam. Trusted email from a domain that Microsoft has flagged as safe will have a green bar attached to it.

Additionally, you’ll have the option of telling Microsoft that a message it mistakenly flagged as suspicious is in fact genuine.

Safety Tips: Microsoft Outlook for Office 365 to get a Security Perk 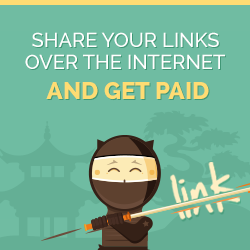 While, Web 2.0 has come to be known to denote Websites that emphasize user-generated content, usability, and interoperability; it more-or-less suggests a new version of the World Wide Web, not update to any technical specification, but the cumulative changes in the way modern Websites are presented and accessed.

Typically, Web 2.0 site may allow users to interact and collaborate with each other in a social media dialogue, in contrast to traditional Web pages where people are limited to the passive viewing of content.

Now, how do you effectively monetize such dynamic web spaces - comprising mostly user-generated contents? if you’re looking for the working methods through which you can make money online, then find below detailed review of the best ways to make money through your websites and blogs.

If you've been looking for another comparatively easy way to make money outside the old monetization systems listed above, then Shorte.st is best platform for you - mainly due to top notch payment rates, clean tracking implementation and the user-friendly design.

Shorte.st offer different ad types: short links, popads, entry and exit ads; and there is also a referral program. With their eCPM (Effective Cost per Mile) calculated by dividing total earnings by total number of impressions in thousands, you're assured of earning even with a low, but steady and quality traffic website.

Asides the familiar ads formats described above, Shorte.st also effectively maximizes publishers traffic with a new innovation ads format that takes advantage of exiting visitors by displaying an interesting advertisement (based on their likes); once they're on leaving your web pages they'll see ads on intermediate page.

They've got easy to implement tools designed for different needs and purposes; such as Complete Stats, Website Scripts, and Social Widgets.

And the fun part, getting paid is as easy as a breeze, with proven and acclaimed effective payment solutions like: Payoneer, PayPal and WebMoney, your payment just couldn't go wrong! 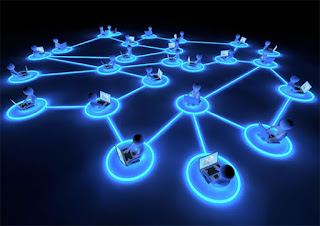 Microsoft's Build developer conference in San Francisco on March 31, afforded the jewel of developers the insight on building apps that integrate with Office, allowing them to build applications that know how users work with one another.

The company announced six new APIs to improve the Microsoft Graph, including one that allows developers to see when a group of users is available for a meeting.

Meanwhile, developers are expected to build add-ins for Office applications — which, add-in will let people to easily schedule appointments with coworkers.

While, Office’s integration with other services is paramount, Microsoft's latest move is seen as direct take-on Google Apps and other productivity suites. Albeit, whether developers will actually choose to pitch with the old warhorse is what remains to be seen.

How Microsoft intends to take Office Collaboration to the next Level 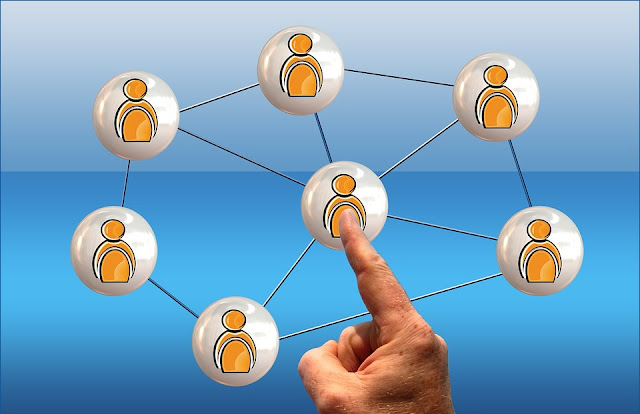